I made a wonderfull trip, that’s to be said. I spent a few more years than expected, on this little trip in the kingdom of knowledge and learning. But then again, it was worth every drop of sweat.I climbed mountains of shear math, swam  the rivers of code, rested on the shores of the seas of algebra.

I were astonished at the complexity of the city of human relationships; so many meandering streets, unexpected  Kasbah’s, markets, little shrines. A place to never ever leave one would think. But ala, the road goes on.

The mountains of culture were really humorous; most of them were collapsing spirals. Almost all of them were very eroding from within. Time has every day a mouthful of them and none of them will be spared.

But as always, one day the trip ended on the porch with the letters ”HOME” written on it. Back to business as usual.

In my absence some fungi had a little taste of some of my hammer stems; bastards. They actually consumed a little bit more; the old door to the cellar, my workbench, the carton tubes of my welding rods. Almost everything they could get their little mycological threads on to. My, this seemed a bit worrisome to me.

Another little nasty detail was to be found in the vaulted ceiling. As this was probably constructed around AD 1854, it was not of the best quality one might find. So it had actually led through a whole lot of water.  Most of this water also seeped away through the floor. So I did not have to swim to my workbench. That was a lucky thing. But a whole lot of my tools were just slightly a bit rusty. Cynics would reply:”What would you expect when you are away for about ten years!” 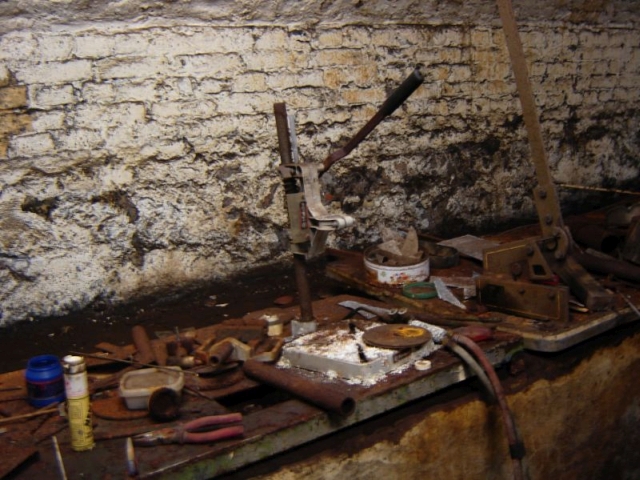 Well, maybe they are right in a sense.  Still it is not really nice.

Another  misfortune was to be found in the ongoing progress of the city of Maastricht. For about 50 years the old spaghetti factory of the Bauduin family had resisted the urge of the Maastricht council to build a whole lot of new condoms.

For years the old masters of the manner, two brothers, had just laughed away all the property developers with their big plans, arms wide spread, eyes on the horizon and money in their minds.

But first the small one of the two brothers left to hunt on the endless bowl of pasta. Leaving his bigger brother with a devilish grin on his mouth and the aura of victory above his head. Not for long though, he lived a few more years and then found his bike parked on the other side.

In the mean time one of their sons had taken over command of the ship, making money out of every litle corner the inheritance gave him. But he also grew old and weary. One day he bent over in the furious storm the city council invoked over him and sold the grounds.

So I had to leave. That was it then. An era came to an end.

But I found a new place. Well hidden, just behind the shoreline and dunes of Holland. Hopefully the rise of the sea will not be too quick, because I hate it to get my feet wet in winter time.

Little note for visitors who are not aquainted with the dutch language: If you are  interested in my art, please click on the union jack in the upper left corner, or follow this link.