So I moved, to another town, another place. Much more quiet I think. Although I do miss the  hooting of the male Tawny Owl (Strix Aluco) in the autumn. And also the females of this little owl who were always screeching from pure joy in the large Poplar behind  my apartment.

I will also miss the shrill laughter of the Green Woodpecker (Picus Viridis). A very special sound I think.

The White Storks (CiconiaCiconia) on the other hand were a bit boring into my opinion. They are large and once they were rare, because they were extinct. But not anymore since one guy started a very successful breeding program.Nowadays they are almost a pest.

Almost as much as the Canada Goose (Branta canadensis).

But when I came to live here, I wondered:” Why all the police camera’s in the street? What are they staring at?”Very soon I would find out. 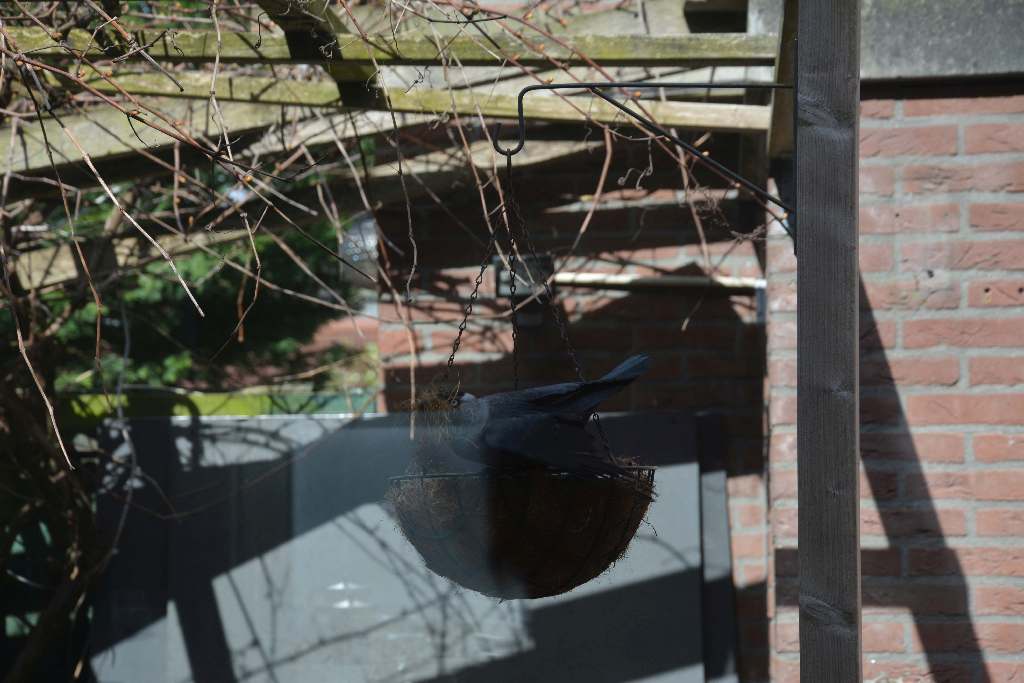 First it was this little black feathered guy who took a few beaks full out my hanging basket.

Two months later, I were just having my tea in the morning, I took a look out of my window into my garden and saw a little band of House Sparrows (Passer Domesticus) with youngsters. “ Nice !” I thought. But then the scene quickly changed.   A few minutes later a Eurasian Jay (Garrulus Glandarius) perched in my backyard. I did not think too much of it, not being aware of its utter fierceness.

Two minutes later it was back, and settled itself on a pole of the mouldering fence with in its beak a young sparrow, fighting for its live and air to breath. Not for long though, his life was quick gone, back to its creator.

One moment I thought:” Should I do anything?” But the next moment it was already not necessary anymore. On the other hand; if all young sparrows were to be saved, we quickly would end up with much to much sparrows starving a horrible death.

After all life was gone, the Jay started to rip apart the corps. The Serengeti was transported to my backyard, without due notice.

The only thing missing was the reassuring voice of sir David Attenborough. 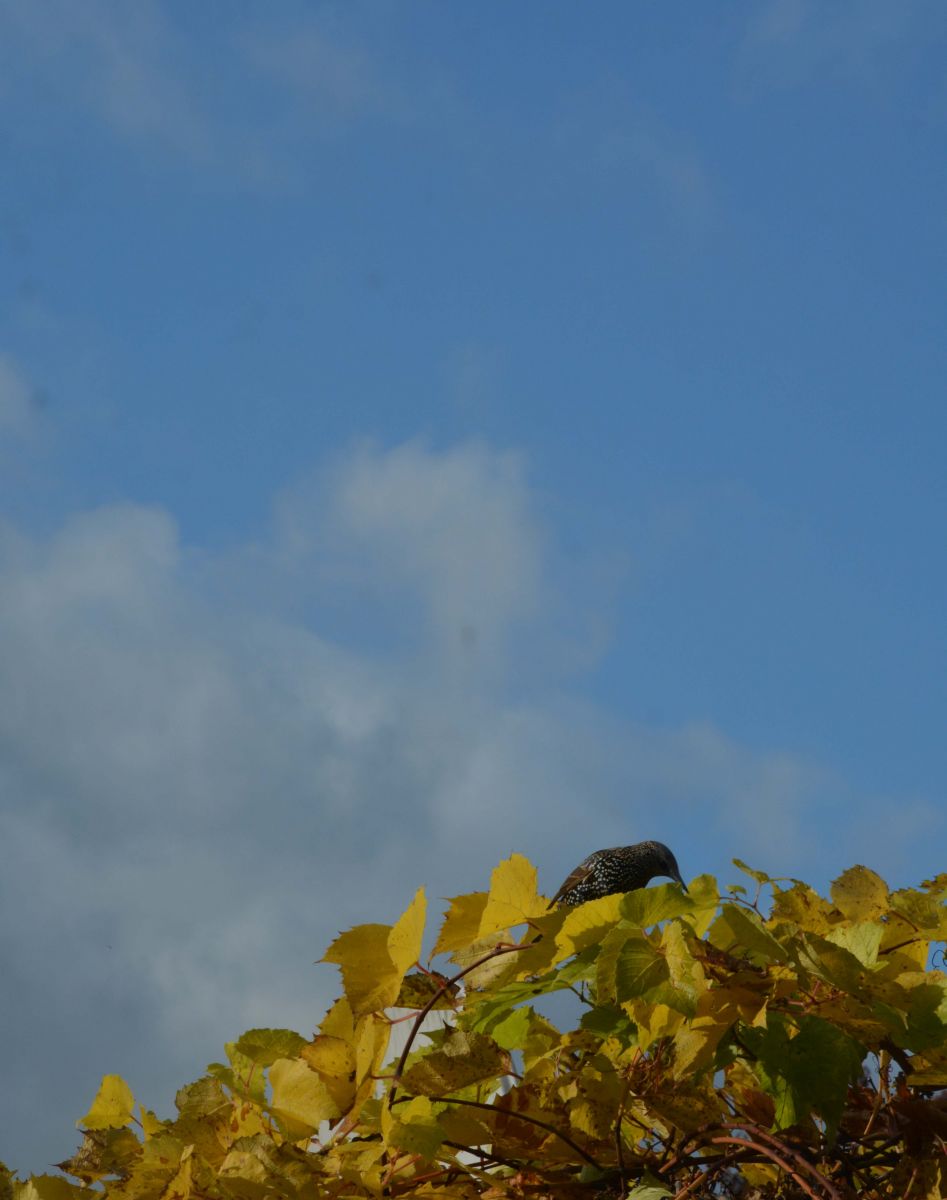 In the end of October a few spotted and quick feathered  villains inspected my vines. They chirped their pleasure loud and clear.

Soon a whole pack gathered on the roof beyond.

And then at once started their raid.

Each one grabbing a few grapes and then Rhhuuf. Rhhuf, rhuff, off they went. Within 30 seconds they had gathered a mouth full and were gone already. This repeated itself many times until no grape was left.

The job was finnished off by sending in the fat wood pigeons. 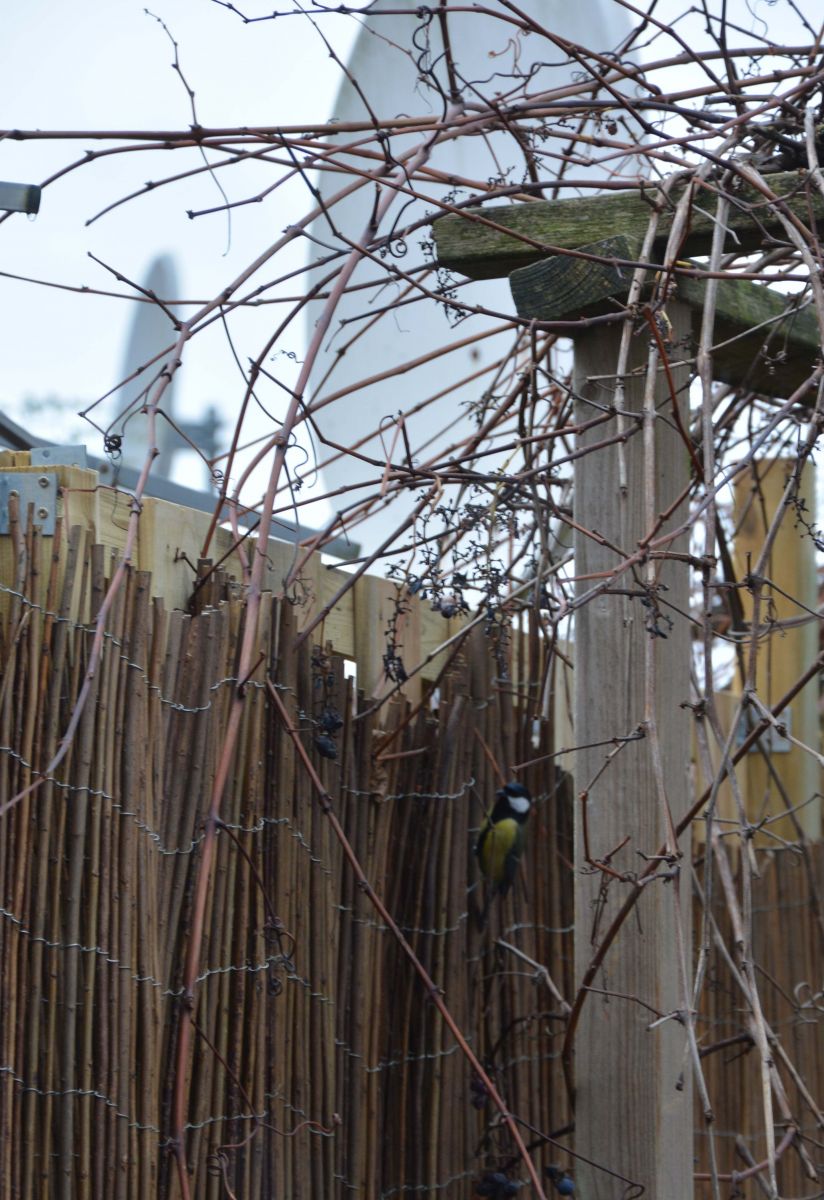 Unfortunately  that was not the end of all the malicious terror. There was more to come and fear. One morning a masked little bandit explored my yard. First it climbed a few walls explored the grapeless vines, not much though.

I thought I had a good stack of sunflower  seeds.

Until this robber and his friend found out.

After that my funds at the sunflower bank were raided time by time. Leaving me only the empty seed caps. Quick as water they are.

Little note for visitors who are not aquainted with the dutch language: If you are  interested in my art, please click on the union jack in the upper left corner, or follow this link.